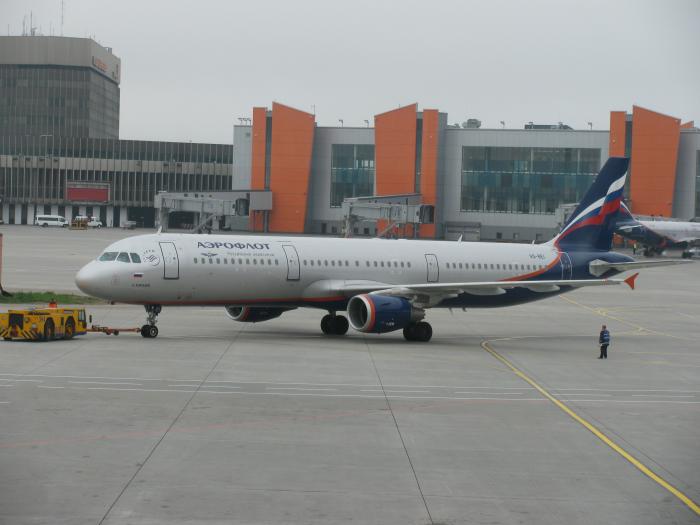 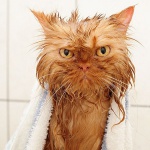 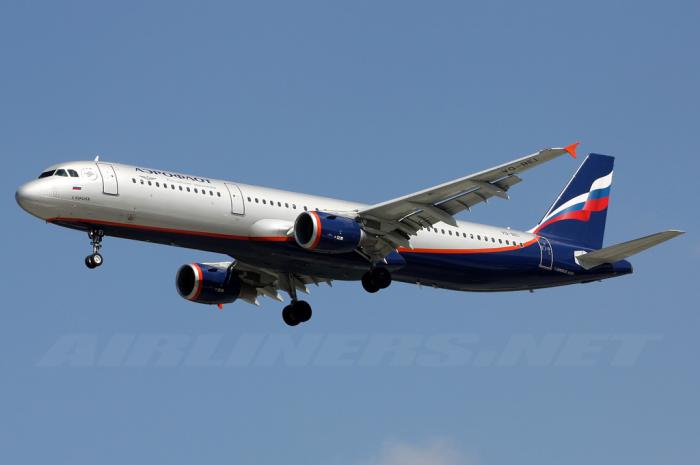 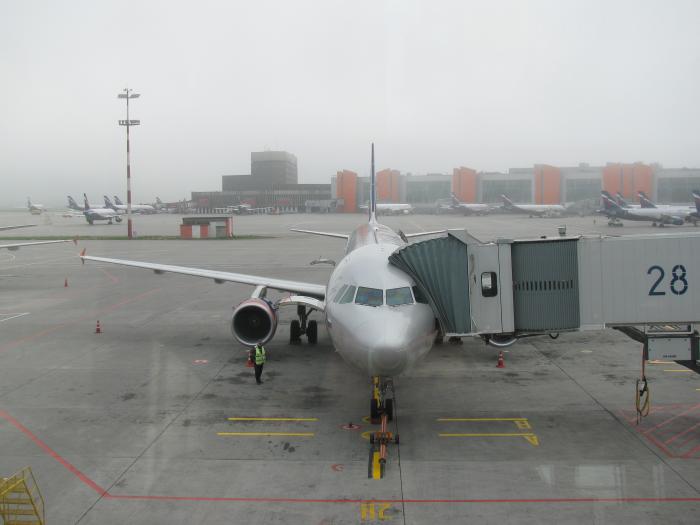 The first flight to Copenhagen under the Codeshare agreement is carried out by Aeroflot. It means the full free-of-charge Aeroflot service including food and beverage for the low-price ticket. It’s quite OK considering the round-trip ticket price (being not a low-coster SAS gives nothing for free). The standard breakfast consisted of the following: 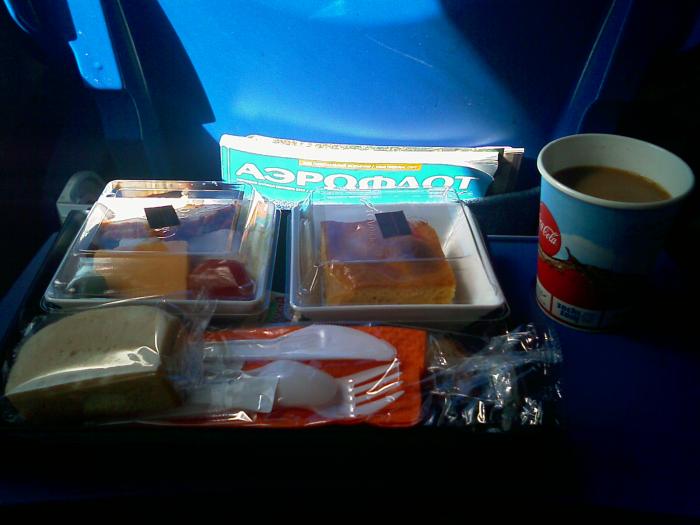 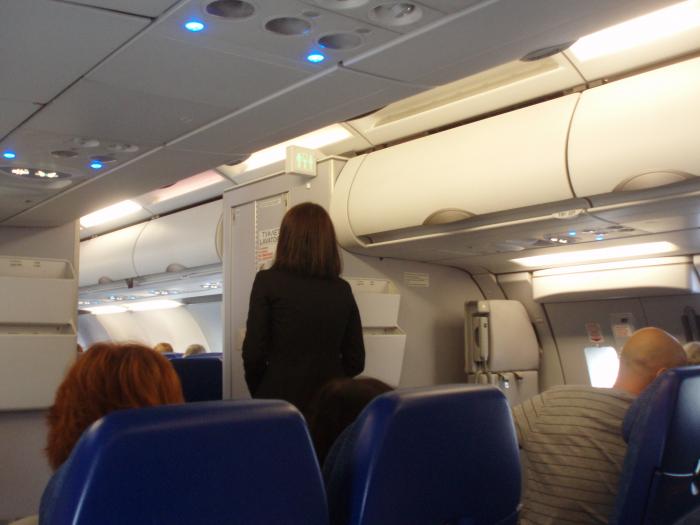 The stewardesses looked tired (or maybe sleepy), the aircraft itself was rather shabby. The cabin upholstery had come off somewhere, the stains could be noticed on the seats. The seat in front of me had a torn off magazine pocket. No more claims – the floor is clean, the lavatory is satisfactory: 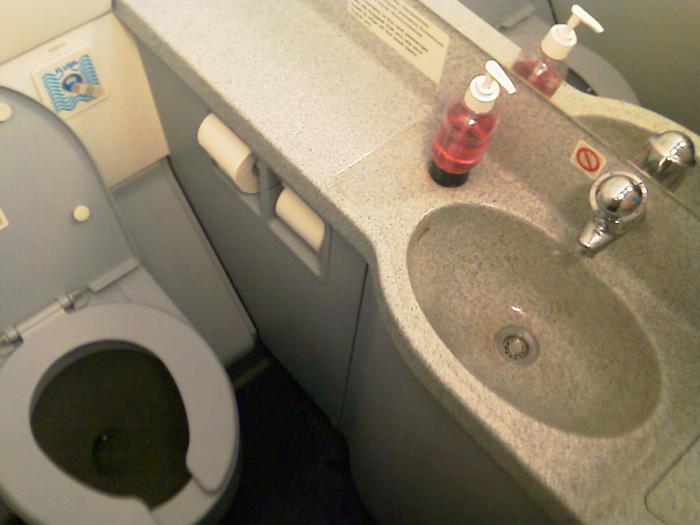 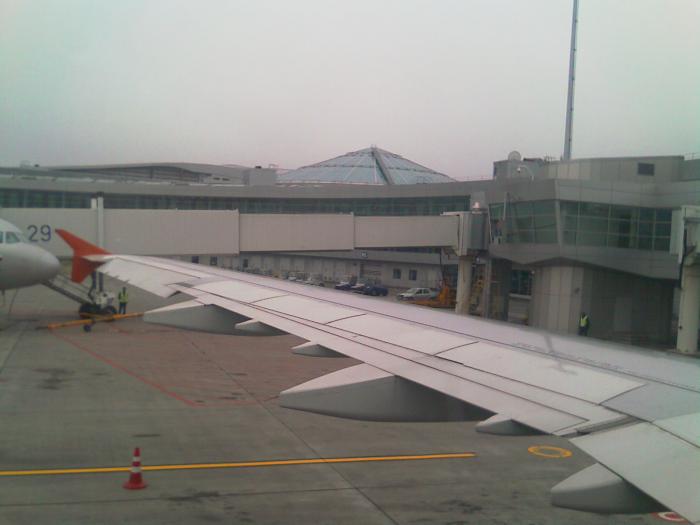 That day the weather in the North of Moscow was no good – we had to take off from runway 07L/25R in tight fog. Nevertheless after the take-off we were followed by the sun with thin cloudiness till Copenhagen. After breakfast there were offered some goods for sale (the assortment on domestic and foreign Aeroflot flights differs). On the whole the flight is quite tolerable, two hours is not the time to get tired. 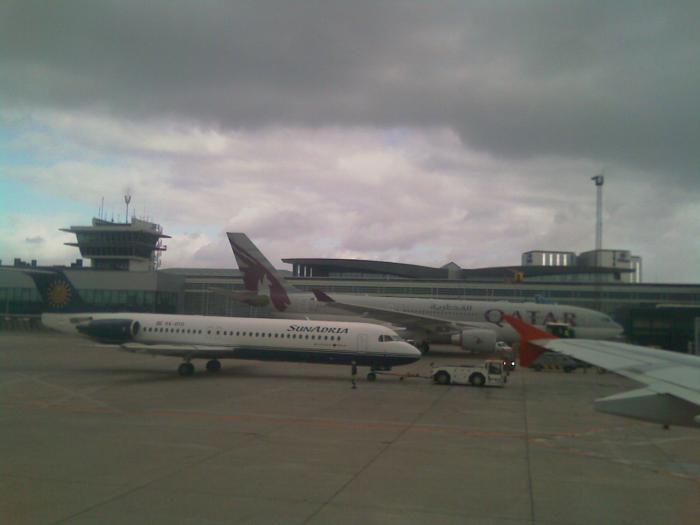 The landing in Kastrup was in cumulus clouds as well. They quickly taxied to the gate, dropped off the passengers and unloaded the luggage. The Copenhagen airport appeared to be tidy and empty – not many people take flights in daytime in the beginning of the week. The can of Sprite laid up beforehand had to be drunk before transfer – the liquids and meat are forbidden in the baggage by the new EC law. After a quick examination I left for the transfer area. Several duty-free shops are available before the passport control to the Europe (I was followed by the Aeroflot crew eager “to refill” before the back flight). 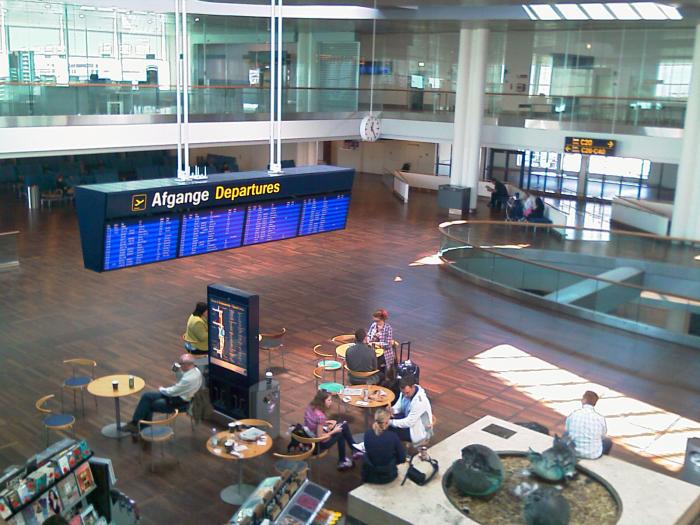 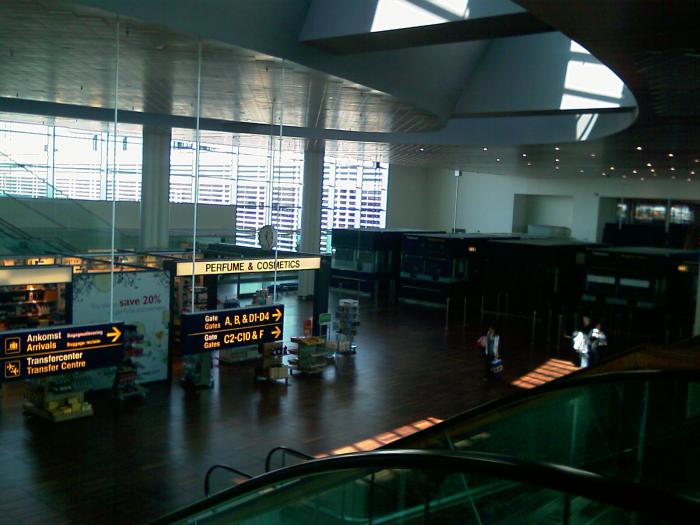 All kinds of entertainment in the airport are to be paid for. There’s no even free wifi. This fact is rather curious in comparison with the more than expensive France, wh ere 15 free minutes are always available to check up the mail and to look through the news. On the whole, Scandinavian tidiness and cosines are everywhere. There are places to recharge the mobile phone, to use the PC and to have a snack. There are many recreations with soft armchairs to spend some quite minutes.

SAS flies to the Europe by MD-80 aircrafts. There are plenty of them with the airlines. Domestic flights are served by Blue1 and Widerøe , the members of SAS Group. My flight to Paris (joint with the United) was made by the following aircraft: 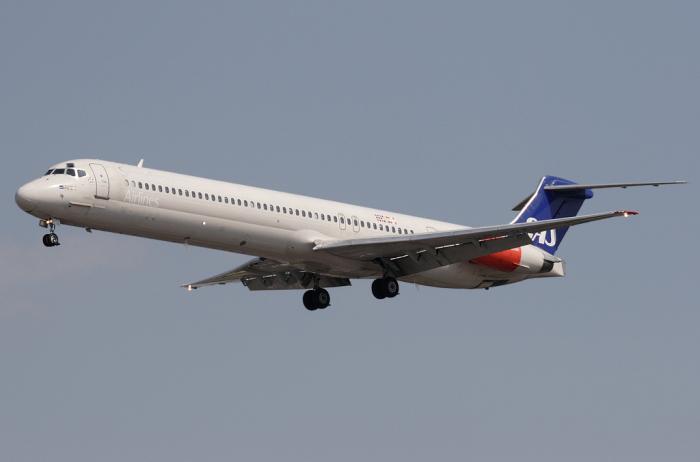 
In spite of some unfavorable responses SAS do their best to satisfy their slogan «Like Swiss watch but Scandinavian». It’s a pity, but my flight didn’t fit this formula – we took off from the 04L/22R runway with a delay, luckily minor. As far as the aircraft is concerned I wondered at tidiness and perfect functioning of all the cabin equipment including illumination, conditioning and shutters to the kitchen compartment. The stewardesses may be estimated at the picture – SAS obviously prefers professional skills to the fine appearance. 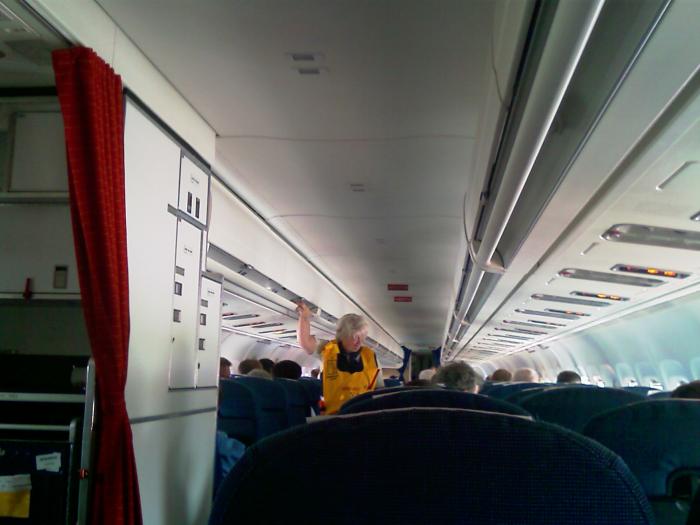 The take-off and landing were a bit unpleasant. The available responses about SAS taking off and landing like a space rocket are 100% true. But the European air traffic regulations are rather special – ecology and fuel economy are much concerned of. I had a seat in the plain’s tail with the engine behind the window. But the headphones make the flight quite tolerable. The plain wasn’t filled up, but the attempt of a passenger to take another seat was rejected. The reason is unknown ‘cause I don’t speak Danish, alas. SAS airlines serve free food only at transcontinental flights. At the flights to the Europe you have to pay in order to eat. Bearing in mind the exaggerated prices in Kastrup I considered the food served onboard to be available. For example, a sandwich with cola costs 55 DKK (apprx 10 USD). My choice was a salad with chicken and pasta (65DKK, apprx 12 USD): 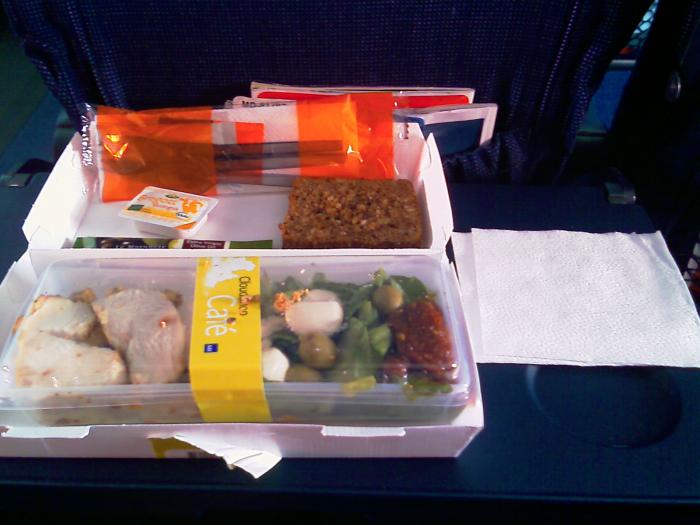 To make my review complete I examined the lavatory. It appeared to be clean and tidy, like everything in the plain. 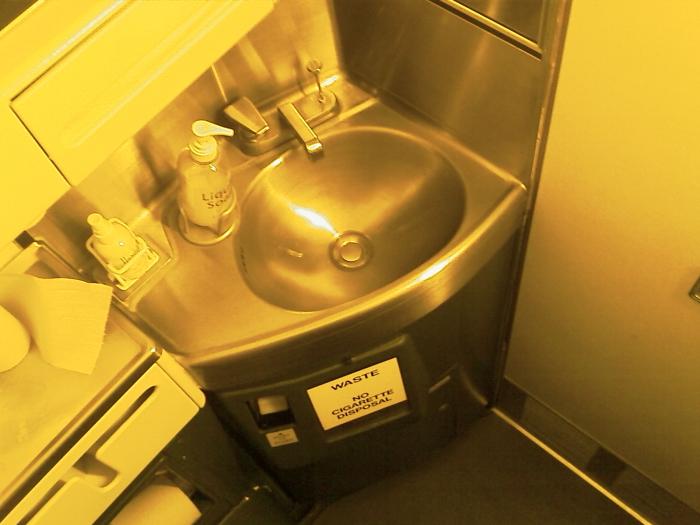 By landing at CDG T-1 the captain apologized for the delay which finally was 10 minutes. I’m quite satisfied by my choice – the quality service is worth the money paid for the ticket. All the rest depend on the transportation regulations having some special hints. SAS Group supports its bonus program joint with some other airlines – Eurobonus. There are lounges of the airlines in Kastrup and Paris CDG as well. My following travelling was by trains only, not to be described here…

About aircraft "Airbus A321"

Airlines Inform - your guide to airlines all over the world.
Copyright © 2008-2020 www.airlines-inform.com. All rights reserved.
/flight-reports/morrow_en-342.html 1 1 1