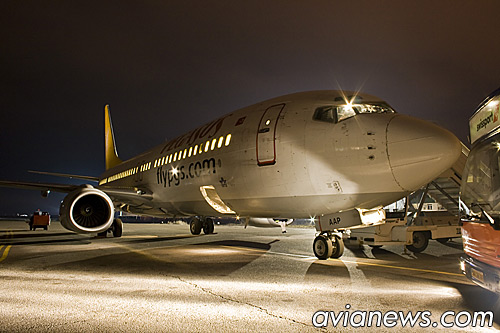 In October 2010, the Turkish low-cost carrier Pegasus Airlines introduced a new route between Kharkiv and Istanbul. Flights going either way are scheduled at night. Departure from Kharkiv is at 3:15 AM (flight PC 751), and from Istanbul at 11:40 PM (flight PC 750). The trip described below was made in December 2010.

The easiest place to buy tickets is online from www.flypgs.com. It’s fast and easy. Departure from Kharkov took place at the new terminal, which is currently open only during the fall months. The area around the building is open and clean, and the structure itself is well-lit, making it hard to miss from even a few hundred yards away. Inside it’s quiet, well-lit and warm. There are only a handful of passengers around at this time and no lines. 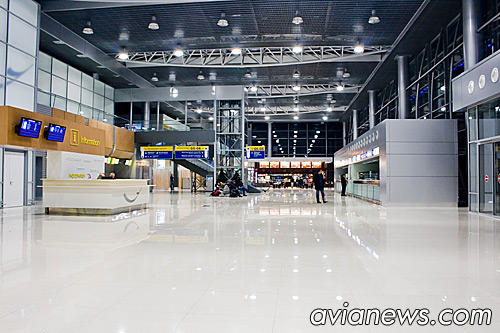 The new building of the Kharkiv airport definitely deserves the title of best air terminal in the Ukraine. The high, illuminated ceilings prevent it from getting stuffy and uncomfortable. Two cafes at different ends of the building give you the opportunity to dine either casually or luxuriously. If you’re only looking to grab a quick bite to eat, you need the café in the right wing – called Kulinichi – which has a variety of hot dishes and baked goods.

Pegasus Airlines allows you to register online, but only for flights leaving Turkey. In Kharkiv, I had to check-in the old-fashioned way. However, with three check-in booths open it took no more than a few minutes, and with check-in beginning two hours before departure there’s plenty of time to get everything taken care of. 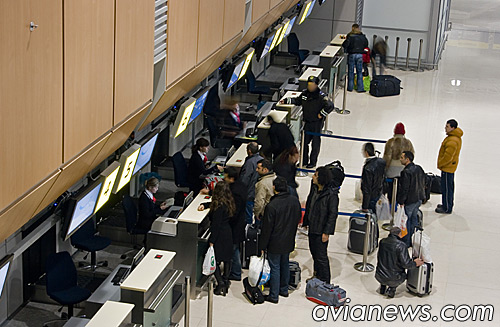 After obtaining the boarding pass, you can proceed to customs, which is located on the next floor, after which you are allowed into the waiting area with its duty-free shop. The hall has around 400 seats, and a café. The airport has plans to expand this area with more shops and a meeting room. 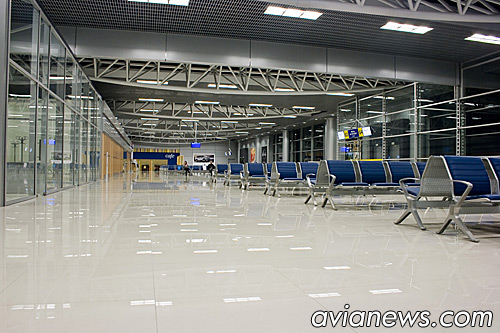 By the end of 2011 the terminal is supposed to get 3 extendable boarding ramps, allowing passengers to get on the plane without having to step outside. At the time of this trip we were taken to our plane by bus.

The flight to Istanbul was on a shiny new Boeing-737-800, tail number TC-AAU, sporting the new Pegasus Airlines livery. The plane is less than a year old, everything is brand new and looks sparkling clean! 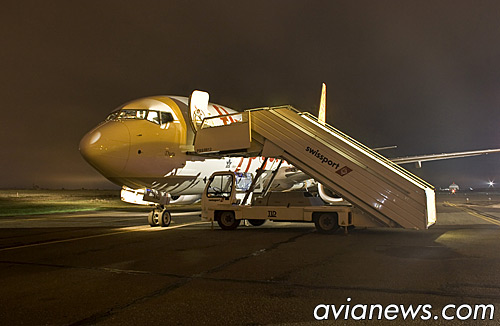 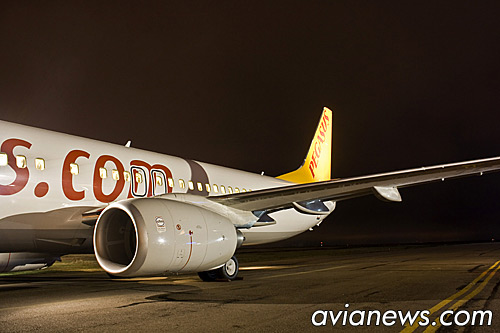 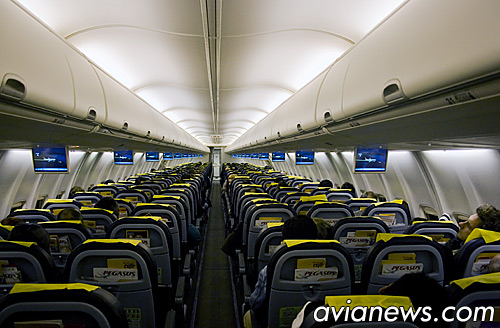 Pegasus Airlines, like most low-cost airlines, uses the Boeing-737-800 configured for maximum passenger capacity, with 189 economy-class seats. The seats themselves are a new design by the Recaro company, which makes them more compact and thus allows for more leg room. 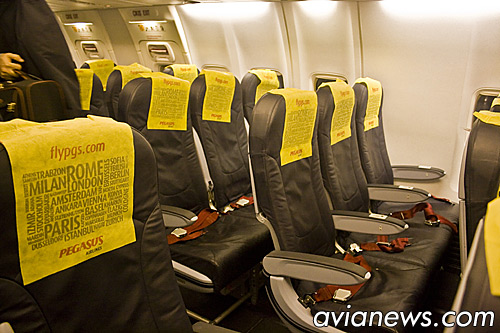 Each seat has a menu, a catalog of duty-free merchandise and a large, glossy copy of the airline’s official magazine, in English and Turkish.

I was very pleasantly surprised to find that the plane has an onboard entertainment system. The screens show promotional videos for the company, the location of the plane, its speed, altitude, and so on. 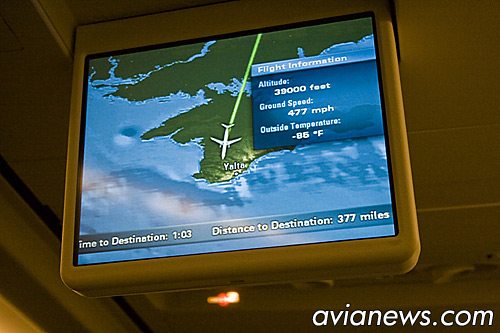 Flight attendants no longer have to demonstrate safety procedures in person. This is handled by a video showing kids dressed in flight attendant uniforms going through the drill and explaining everything that needs to be done. Cute. The video is subtitled in both Turkish and Russian.

During both flights (Kharkiv-Istanbul and Istanbul-Kharkiv) the pilots and flight attendants addressed passengers via the PA and repeated the message in three different languages: English, Russian and Turkish. Crews which regularly fly to Kharkiv always have at least one member who is completely fluent in Russian.

The trip takes approximately 2 hours. After attaining cruising altitude, the crew offered food, drinks and duty-free merchandise for sale. The flight attendants were unobtrusive, but helpful when they were needed. On the return trip, when one of the passengers began feeling sick, they led him to an empty row of seats at the front of the cabin, brought him some water and kept an eye on him until he was feeling better. 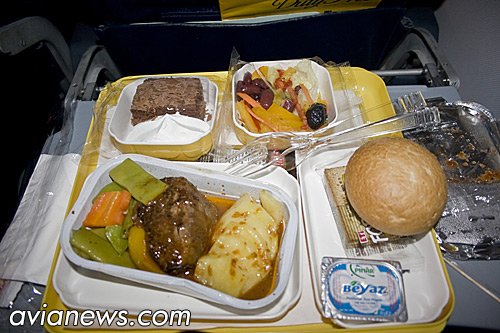 Pegasus offers in-flight meals at an extra cost. You have a choice of two meat types, with sides of potatoes and assorted vegetables, salad, a bread roll, cream cheese, some crackers and dessert. The entire meal cost 10 euro. You can also pay with Turkish lira and US dollars.

Sabiha Gokcen International Airport is the second largest airport in Istanbul, and is located in the Asian half of the city. The new terminal covers an area of over 1,900,000 square feet (180,000 m2) and services all flights. The two older terminals have been shut down. Check-in is located on the second floor. There are also several cafes, fast-food spots and souvenir shops. 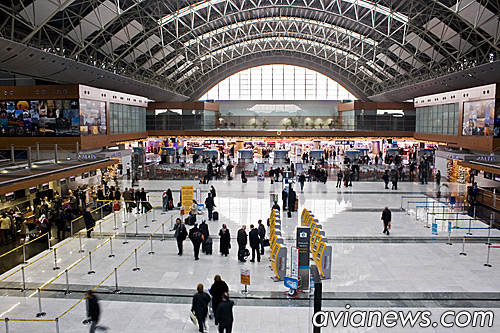 There’s wireless internet throughout the building. There are numerous waiting areas with power outlets which you can use free of charge.

In Istanbul, you have several options when it comes to checking in. If you have any luggage, you have to check-in at the stands. Online registration becomes available up to 24 hours in advance and is applicable to flights bound for Kharkiv. If you don’t have the opportunity to print your boarding pass, you can obtain them at a Pegasus Airlines self check-in desks up to 4-5 hours ahead of time by entering your registration code. 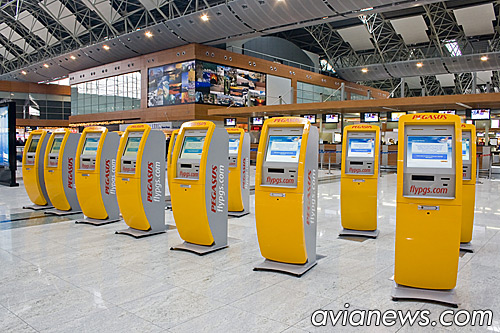 It’s important to note that your seats are assigned automatically, and are then indicated on your boarding pass. If you’d like to reserve a particular seat, you have to pay an additional reservation fee.

The return trip was also on a Boeing-737-800. However, this plane (tail number TC-AAP) was an older version and thus didn’t have an entertainment system built in. Both flights departed and arrived as scheduled and without delays.

Pegasus Airlines is a reliable airline company with affordable fare. Its new Boeing-737-800 passenger jets have onboard entertainment systems, and there is no luggage fee. Flights to Kharkiv always have a Russian-speaking crew member who can act as a translator.

The nighttime flights are scheduled 7 days a week, making it possible to take a trip to Istanbul and return the same day, whether you’re travelling for recreation or on business.

In Istanbul, the company offer connections to various cities in Western Europe and Turkey, which gives residents of Kharkiv and nearby areas an opportunity to travel to a number of different places at a reasonable price.

Airlines Inform - your guide to airlines all over the world.
Copyright © 2008-2022 www.airlines-inform.com. All rights reserved.
/flight-reports/avianews_en-210.html 1 1 1