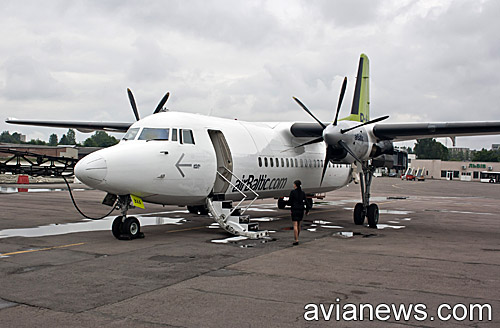 From Kiev to Lviv on a Latvian Fokker-50

The flights described below, Kiev-Lviv and Lviv-Kiev, conducted by Ukraine International Airlines, took place in the summer of 2011.

Initially in 2011, Ukraine International Airlines turned down the idea of operating routes to Lviv. Fully laden Boeing-737 jets, which make up the majority of UIA’s fleet, wouldn’t be able to take off fr om the short runways of Lviv International Airport. As a result, however, the airline risked losing a major chunk of its customer base. To solve the problem UIA decided to temporarily, over a period of several months, to wet lease Fokker-50s belonging to a Latvian airline, Air Baltic (a wet lease is a type of aircraft lease in which the lessor also provides the crew and maintenance). At the same time, they started a promotional campaign to sell tickets at the cost of $100 for a roundtrip.

Ukraine International Airlines has an online check-in option for flights on the Kiev-Lviv route. The system allows you to pick your seat, print your boarding pass immediately or at a later time, and even lets you change your seat after the check-in process is complete. Online check-in opens 23 hours before, and closes one hour prior to the departure time.

In Boryspil International Airport, there’s no need to stop by the check-in desk if all you have is carry-on. The security staff by now is used to seeing boarding passes printed on A4 paper and lets you through to the waiting area without any unnecessary delay. With this in mind, if you’re traveling light and check-in online, you can get to the airport as late as half an hour before takeoff.

In Lviv, on the other hand, there are no self check-in booths wh ere you can scan your boarding pass, so if you checked in online, you are handed a preprinted boarding pass at the check-in desk.

In Boryspil, boarding takes place at Terminal A, while in Lviv it’s done at a separate, one-story structure located to the right of the main terminal building.

In Boryspil International Airport, boarding began 25 minutes before departure time. Passengers were taken to the plane by bus. Since the plane wasn’t very large, it took only one bus to deliver everyone from the terminal. As such, there’s really no sense in rushing, as you would still have to wait for everyone to get on the bus.

While on the platform, I took several photos of the scaffolding around the new Terminal B and our plane, after which a member of UIA staff demanded to see my passport, claiming that taking photos was forbidden. He didn’t specify why. After getting a good looking at, my passport was returned.

In Lviv, all passengers are hurried onto a bus in a matter of 3-4 minutes and immediately taken to the plane.
Both flights took off as scheduled, on the dot. 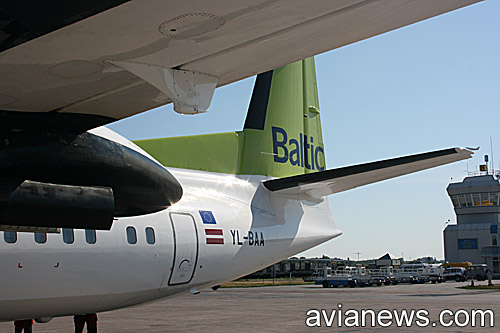 The Fokker-50 leased by UIA (tail number YL-BAA) carries 50 passengers, with all economy class seats. All flights between Kiev and Lviv use this plane. 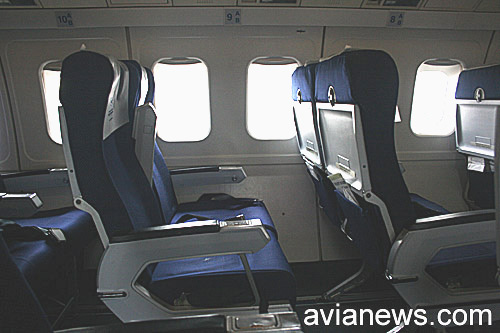 The 23-year-old airliner uses turboprop engines and is the West European equivalent of the An-24. However, unlike the An-24, the Fokker-50 has a much more modern-looking cabin. Soundproofing is also better, and the plane doesn’t seem to vibrate as much as the An-24. 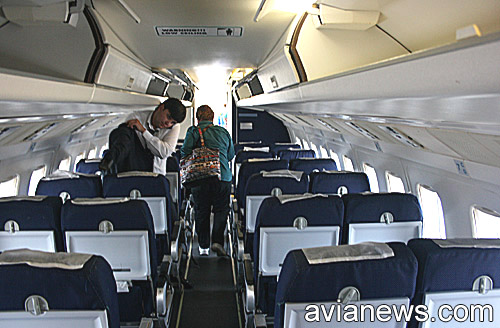 There’s enough leg room to prevent discomfort, and the seats themselves are quite comfy, although it’s unfortunately impossible to fit your carryon under the seat in front of you because of the way they’re attached to the floor. 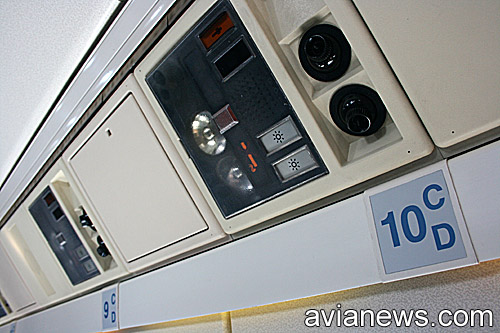 There’s less noise and vibration towards the tail end of the plane, so keep this in mind when choosing your seat when you check-in. 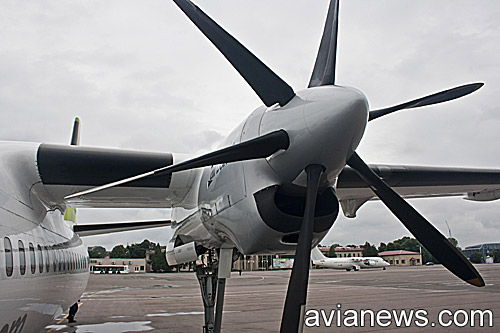 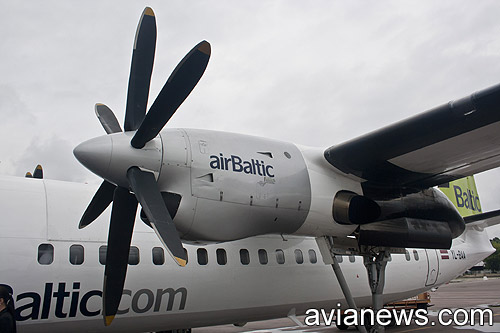 The pilots were Latvian. During the flight they would talk over the PA in Russian with a slight accent, giving us information on our progress and the weather conditions at our destination. Unfortunately, on the return flight from Lviv to Kiev, we could barely hear anything on the PA due to the noise levels, although the flight speed on the way there was approximately 280 mph (450 km/h) at a cruising altitude of almost 23 000 feet (7000 m). 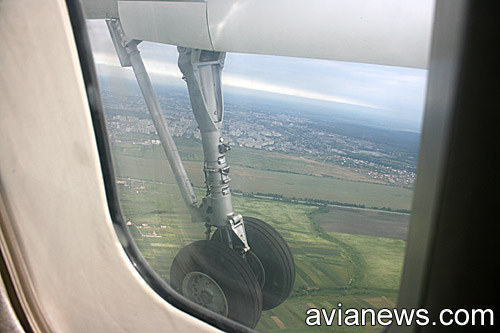 The climb and descent are pretty smooth, which means the pressure changes are easier on the ears than they are with most bigger jet airliners. Landing in both Lviv and Kiev went smoothly as well, courtesy of the pilots’ skill. 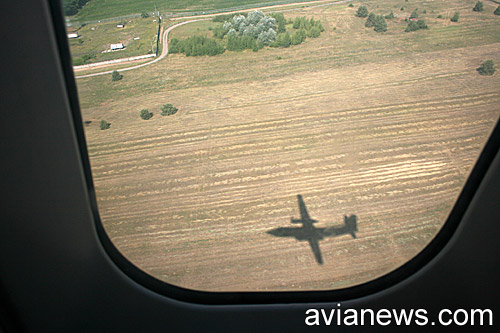 The cabin crew on both flights consisted of one flight attendant from Air Baltic and one from UIA. They were always very polite and friendly.

Fifteen minutes into the flight the crew began distributing sandwiches and drinks, which they managed to take care of within 10 minutes.
During the Kiev-Lviv flight, lunch included sandwiches, tea, coffee, water and various juices. 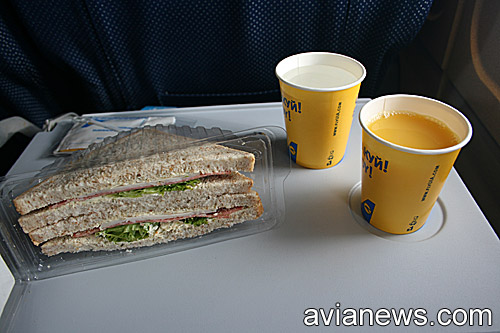 On the return trip, lunch consisted of cheese and meat sandwiches, water and juices. 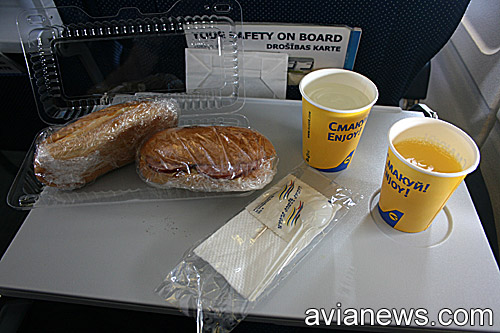 The flight to Lviv was 1 hour 35 minutes long, while the trip back to Kiev was 1 hour 15 minutes. A jet airliner takes approximately 50 minutes for the same trip.

Entertainment included a scenic view out the window and the rather battered airline magazine. Unfortunately, like most such magazines, it isn’t very informative and is mostly made up advertisements.

Compared to a similar trip to Lviv conducted by UIA in 2009, the service hasn’t changed and remains quite satisfactory, although it’d be nice if the airline’s fleet was updated with newer aircraft.

Airlines Inform - your guide to airlines all over the world.
Copyright © 2008-2022 www.airlines-inform.com. All rights reserved.
/flight-reports/avianews-269.html 1 1 1