Ukraine International Airlines (shortly UIA) currently performs scheduled service fr om the capital of Ukraine Kiev and Frankfurt am Main in Germany. They are flights PS-401 (Kiev-Franfurt) and PS-402 (Frankfurt-Kiev). The round-trip flight that is the basis for this report took place in February 2009.

Online check-in is available for this flight up to 23 hours prior to departure time. Upon completing the online registration form, you can print the boarding pass fr om your computer. As a result, you can get to the airport less than an hour before take-off and still be on time.

On the downside, they could have made the online boarding passes resemble regular ones. The staff at the Boryspil International Airport hadn’t yet become accustomed to processing online registrations, and were rather perplexed at seeing my pass. In the end, they exchanged it for a regular boarding pass.

I experienced no such problems in Frankfurt. The boarding agent processed my printed pass and handed it back to me for the flight.

A bus was used to board and disembark each time. Notably, in Boryspil the bus stood waiting on the runway for half an hour with its doors wide open, in sub-freezing temperatures, without any regard to the comfort of the passenger or the fact that there were young children onboard. 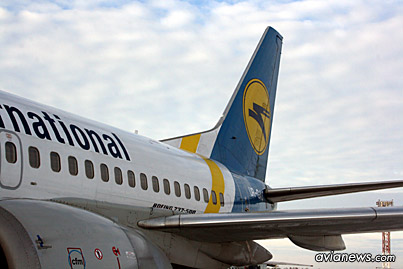 The cabin of the Kiev-Frankfurt flight, a Boeing-737-500 (tail number UR-GAS), was in good condition despite the plane being fairly old. According to its service history, the airliner was produced in 1993 and operated by Air France before being leased to UIA. As if to prove it, many of the signs in the cabin were still in French. The upholstery was leather. The flight was delayed for an hour due to greater-than-usual air traffic over Frankfurt, according to the captain, who apologized for the delay. 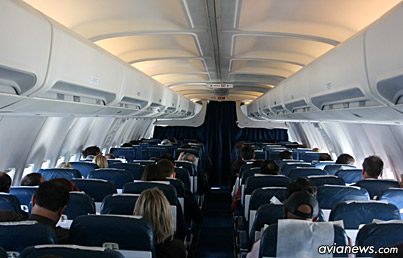 Leg room in the economy class was visibly – about 1.5 times – larger than in a A320 Wizz Air and was approximately equal to that of similar passenger jets employed by AeroSvit Airlines (UIA’s chief competitor). 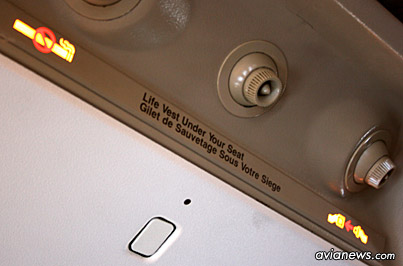 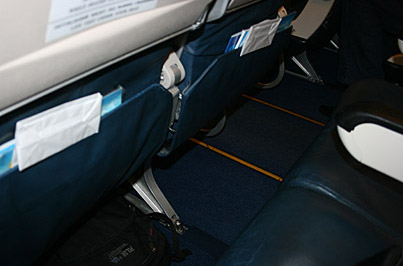 Onboard service was everything you would expect from a standard full-service airline. The staff members were courteous and polite, and the food wasn’t draconically rationed to save on cost. We were served a regular hot meal, rather than sandwiches or crackers.

Tea, coffee, wine and beer were available at no extra charge. In the back of the seat you could find a copy of Panorama, UIA’s official magazine. 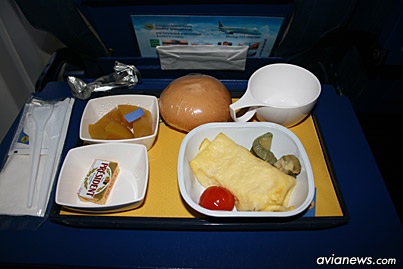 The in-flight meal on the Kiev-Frankfurt flight: an omelet, zucchini, tomato, a bread roll, butter, tea/coffee and canned peaches

The captain would use the PA system every now and again, but very briefly to update us on the progress of the flight. This was a pity because the excellent visibility gave us a good view of mountain ranges and cities we passed over, and it would’ve been nice if the crew had told us what we were looking at. It would really have been a great bonus.

Entertainment during the flight included the meals, the magazines and the view of the landscape below. There was no music or video available.

All in all, the airline offers good service for their class. The standard baggage allowance is 20kg and there is no 1-bag lim it for carry-on luggage, and you can bring along a laptop and other small items. Special dietary needs can be accommodated by request. You can book your seat ahead of time and boarding and disembarking are conducted in an orderly manner with minimal hassle (as compared to some low-cost airlines wh ere there are no seating assignments). Online registration was also convenient.

The cons include aging planes, ill-prepared airport staff who are unfamiliar with processing online registration, and inflated prices on certain flights due to lack of competition from other airlines. Online booking and registration could also be improved so as to allow the option of reviewing booking information, informing the airline about dietary needs ahead of time, and similar things. 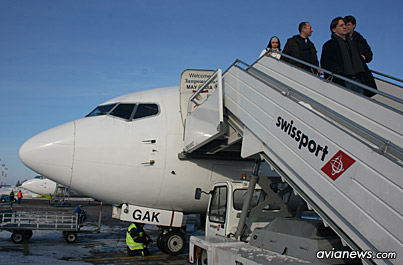 Airlines Inform - your guide to airlines all over the world.
Copyright © 2008-2021 www.airlines-inform.com. All rights reserved.
/flight-reports/avianews_en-207.html 1 1 1